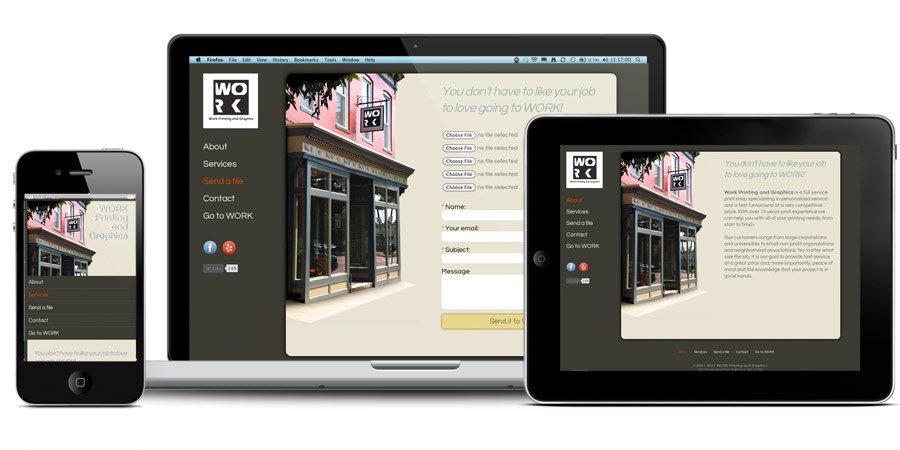 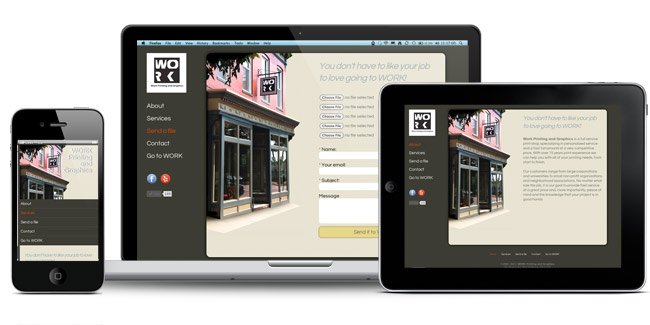 WORK Printing and Graphics is a full-service print shop located in Baltimore’s Pigtown neighborhood. They do incredible work locally and on a regional scale, anything from business cards and posters to large advertisements.

WORK approached me about redesigning their website with a sushi-fresh look and feel. Their target audience is general users, thus the interface and functionality had to be friendly and easy-to-navigate. Additionally, they wanted a file upload feature accompanied by an email notification when a user uploaded a file. Lastly, they had only one design requirement: to incorporate a picture of their storefront in the design.

While designing the site, the two main characteristics I tried to achieve were “simple” and “direct.” The first thing I did was reduce the page count. The original site had several pages with similar information, some visible on the nav and some not. For their new site, I simplified the architecture by compiling some of those redundant pages. In addition, I moved a lot of the text in the header down to the footer, thereby giving the user’s eye more breathing room and making the navigation more prominent.

For the picture of the storefront, I used a photograph of the front facade. Rather than just using a rectangle photograph, I made the image of the building more as an object. The idea was to fuse the image into the design.

I used responsive design, so the site is equally attractive and easy-to-navigate whether it’s viewed on an iPhone, an iPad, or a high-resolution desktop monitor.

Visit www.workprinting.com to see the site. Also here is the before and after of the website.